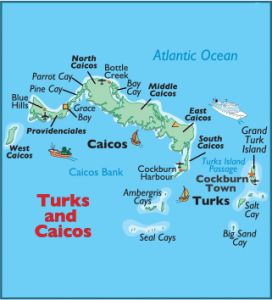 The Turks and Caicos Islands (abbreviated TCI) are a British Overseas Territory consisting of two groups of sub-tropical islands in the West Indies, the larger Caicos Islands and the smaller Turks Islands. The Turks and Caicos Islands are situated in the southeast of Mayaguana Island in the Bahamas and north of the Island of Hispaniola. Cockburn Town, the capital, is about 1,042 kilometres (647 mi) east-southeast of Miami. The Islands have a total land area of 430 square kilometres (170 sq mi). The Islands are geographically contiguous to the Bahamas, but are politically a separate entity.

While there are some 40 plus cays that make up the Turks & Caicos Islands, only eight of them are inhabited by people. The Turks & Caicos natives are called “Belongers” or “Turks Islanders” and are either descendant from African slaves who were originally brought over to grow cotton on the island of Providenciales or have emigrated here from the Bahamas back in the salt raking days. The total population is about 36,000, of whom approximately 22,500 live on Providenciales in the Caicos Islands.

The local population mixes harmoniously with a large expatriate community of British, American, French, Canadian, Haitians, Dominicans and Scandinavians, giving the islands an international influence and unique culture. TCI is known for tourism and as an offshore financial centre. A great number of tourists who visit the Turks and Caicos Islands are Canadian and Americans.

There is an estimated 50 Muslims living in TCI. The Muslim brothers and sisters in living and working TCI are from diverse backgrounds with several of them from the African continent. Since Ramadan of 2009, Juma prayers have been established every Friday at one of the Muslim’s home. Whilst not all the brothers are able to attend the Juma prayers, the brothers and sisters who pray together have committed themselves to practicing Islam on the Island, reaching out to all Muslims and those interested in Islam.

Translations of the Holy Quran in English and Islamic books and literature were sent to the brothers and sisters from the Muslims in Barbados. These books were very well received and they have requested to get as much Islamic material as possible. The brothers and sisters are planning to register an association to enable them set up a permanent place for prayer and a learning center in TCI.